A trainer named Gladion, dressed in black, battling with a powerful fiery-eyed Lycanroc and wearing a Z-ring, has appeared on Melemele Island. After seeing them in action, Ash naturally wants to battle Gladion; however, he’s totally shocked when Lillie appears and calls Gladion her brother. Gladion seems cold towards Lillie and at first refuses Ash’s challenge, but then learns that Ash got his Z-ring from Tapu Koko and had actually battled the Island Guardian. That night, Gladion’s Umbreon delivers a note to Ash agreeing to battle. It’s Ash’s Rockruff versus Gladion’s Lycanroc! However, Team Rocket, who saw Gladion defeat the Team Skull grunts earlier, can’t resist getting involved. Ash and Gladion must work together to rescue Pikachu and Lycanroc. 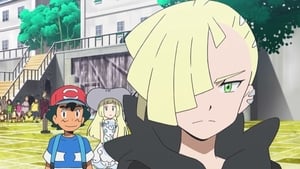