The day of Ash’s grand trial against Kahuna Olivia is finally here, and it’s a Double Battle! Olivia’s Probopass and Lycanroc face off against Ash’s Rowlet and a strangely aggressive Rockruff. After Olivia sets a trap on the battlefield, Ash instructs Rowlet to grab Rockruff by the scruff of the neck so they can fly above it. They defeat Probopass, but Rockruff lashes out at Rowlet and knocks it out!

Rockruff feels terrible about this but soon regains its focus and takes Lycanroc down. Ash wins the grand trial and the Rock-type Z-Crystal, and Olivia has an explanation for Rockruff’s unusually aggressive behavior—she thinks it’s going to evolve soon! 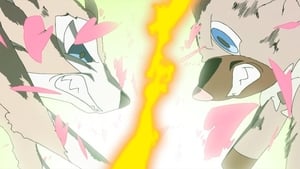