After having little success using the Z-Move Hydro Vortex, Lana and Popplio meet Ida and her Brionne, who use the Z-Move as part of their show and agree to take Lana on as an apprentice! Lana and Popplio train hard—and when Ida’s sweetheart Kanoa returns with reports of sunken treasure, they join the expedition.

The treasure is guarded by a Dhelmise, who’s already annoyed after a run-in with Team Rocket and traps Kanoa’s boat in a powerful Whirlpool. Brionne goes up against it and loses, but after all that training, Popplio is ready. It uses Hydro Vortex to counter Dhelmise’s Whirlpool and send it far away! 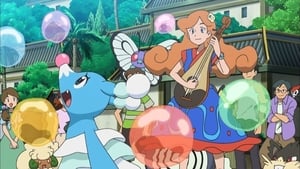