A Mission of Ultra Urgency!

Lusamine gives our heroes their first assignment as members of the Ultra Guardians: catch an Ultra Beast named Buzzwole, who emerged from an Ultra Wormhole on Melemele Island. Equipped with the latest technology, the Ultra Guardians locate the Pokémon, whose aggressive behavior seems to reflect its anxiety about being in a strange world. Ash and Kiawe notice Buzzwole has a habit of striking heroic poses—so they join right in! With Buzzwole’s guard down, Ash catches it in a Beast Ball, and it’s soon returned to its own world through the reopened Ultra Wormhole. Though our heroes will miss Buzzwole, their first mission as Ultra Guardians is a rousing success! 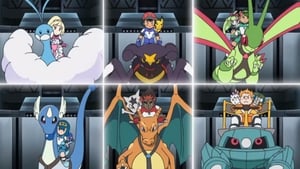