Another exciting Battle Royal is under way! It’s the Masked Royal versus the Revengers, a battle team known for their blatant rule-breaking. When they’re about to unleash a sneak attack on Incineroar, Ash’s Torracat charges into the ring with a sneak attack of its own—and “Ash Royal” joins the Masked Royal for a tag-team match against the Revengers’ Electivire and Magmortar! The Revengers’ boss is Viren, the ruthless developer who once threatened Kiawe’s family farm—which means the Battle Royal Dome itself is on the line! But Torracat and Incineroar prove to be a great team, and despite their opponents’ unsavory tactics, the Double Royals win the day! 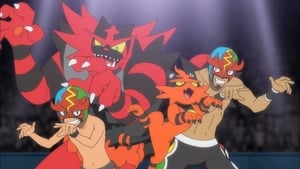