Full Moon and Many Arms!

The Ultra Guardians spring into action to protect Lunala from the mysterious creature who has chased it through the Ultra Wormhole! UB Black (as Lusamine later calls it) drains the power from Lunala’s Ultra Aura, then fastens itself onto the Legendary Pokémon to absorb it! Our heroes manage to fight it off with the help of Solgaleo, but the creature turns a similar attack on Solgaleo, absorbing it and escaping through an Ultra Wormhole. As Lunala recovers its strength, the Ultra Guardians promise to do everything they can to rescue Solgaleo—and the kahunas prepare for a festival celebrating a solar eclipse! 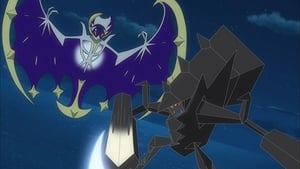