Ash has been training hard, preparing for his rematch against Nanu on Ula’ula Island. But when he tells the kahuna he’s ready, Nanu has another idea. Team Rocket has just come looking for the Twerp so Mimikyu can try out its new Z-Move against Pikachu, so Nanu sends him out to battle them instead! Mimikyu proves to be a powerful opponent, but Pikachu overwhelms the opposition with a new move, Electroweb, and the Z-Move 10,000,000 Volt Thunderbolt. Ash wins, setting the stage for his Ula’ula Island grand trial! 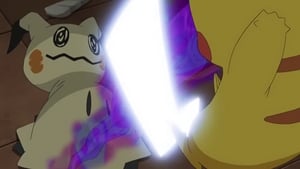