As our heroes take a brief rest near a river, Ash sees a Snubbull rush by on the opposite bank. This wasn’t just any Snubbull either, this one was Madame Muchmoney’s! Ash, Misty and Brock follow Pikachu as it picks up Snubbull’s scent and leads them in the search for the wealthy woman’s Pokémon. Our heroes are racing against time when Team Rocket sets a trap for Snubbull, hoping to get a cash reward from Madam Muchmoney. Don’t miss Snubbull’s reaction when it encounters Team Rocket… it’s so exciting and new, it’s evolutionary! 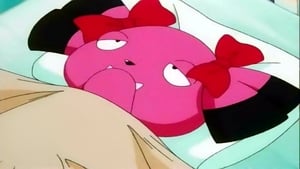