On the long trek to Olivine City, our heroes notice Pikachu looks a bit worn out. Brock suggests it’s the trudging along this trail that has taken a toll. Just then, an old man appears from beside the path and explains the soil in this region contains minerals that absorb electricity. He walks up to Pikachu, kneels down and starts speaking to Pikachu in Pokémon tongue! Upon Pikachu’s response, he rises and tells Ash that Pikachu is exhausted and cannot walk much further. Introducing himself as Simon, he suggests the crew follow him to his rest-stop. Upon their arrival, Ash hooks up Pikachu to a nearby bicycle with the electrodes attached to it. The more Ash pedals, the more electricity is pumped back into Pikachu’s cheeks. Simon explains to Misty and Brock he won’t charge for the recharge and he’ll wave his translation fee. Surprised he charges at all for his rest-stop remedies, Misty and Brock are cut short of saying anything by the arrival of Officer Jenny. There to arrest Simon, she explains several local trainers have been swindled out of money recently by a person claiming to be a Pokémon interpreter. Can Simon really talk to the Pokémon, or is he the scam artist Officer Jenny has been looking for? 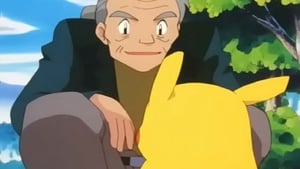