When our heroes stumble upon a one-day street performance, they get to see all types of Pokémon with unique skills. Anxious to know the future, Misty volunteers to have her fortune read by Natu. A young boy named McKenzie and his Pokémon, Natu begin the reading but make several mistakes. Embarrassed, McKenzie runs away with Natu before Misty’s future is revealed. The gang follows McKenzie and suggests he wear a mask during his performances to help boost his confidence. Misty explains if he wears the mask no one will know who he is. McKenzie’s father likes the idea too, believing the mask will lend an exciting element to the performance. When McKenzie returns to the stage, will he and Natu be able to remember the routine and use Natu’s Future Sight to tell patron’s fortunes? 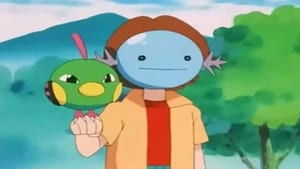