Turning Over a New Bayleef

Taking a rest from their exhausting expedition, our heroes settle down in a small field near a stream to enjoy a mid-day meal. Ash releases his Pokémon from their Poké Balls so they too can enjoy a well deserved break. Overly excited to see Ash, Bayleef runs towards him at full-tilt. Inadvertently, Bayleef uses Tackle Attack and knocks Ash for a loop. When Bayleef’s uncontrollable affection becomes too much for Ash, he looses his temper and says something spiteful. Ash tells Bayleef to go away and stay away! When Ash can’t find Bayleef after lunch, the gang goes on a search and rescue mission. With Pikachu following Bayleef’s scent, the crew winds up at an old woman’s house. She explains how she found Bayleef, hurt and weak near the river’s bank. When Ash tries to re-claim his Pokémon, Bayleef simply ignores him. It is clear Bayleef would rather stay with the kind old woman and her Pokémon than continue the journey with Ash. Will Ash be able to win back Bayleef’s trust and affection? 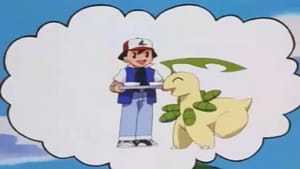