Ash and his friends are in Cianwood City with Janina, an apprentice at the Olivine Gym. Janina picks up medicine for Olivine Gym Leader Jasmine’s ailing Ampharos and returns to Olivine while Ash plans to challenge the Cianwood Gym. Before he does, though, he goes to investigate a man and a Machoke who are sparring on the beach. The man happily orders everyone to the Cianwood Gym—he’s none other than Chuck, the Cianwood Gym Leader!

Ash’s challenge is accepted and a 2-on-2 Gym battle begins. Chuck starts with a Poliwrath; Pikachu should have the advantage as an Electric-type, but it’s defeated by Poliwrath’s physical strength and Double-Slap attack. Ash counters with Bayleef, using its type advantage to beat Poliwrath, so Chuck sends in his Machoke. In the meantime, Team Rocket sneaks into the Gym and gobbles up an unattended meal. They’re spotted by Chuck’s wife, who mistakes them for students and assigns them to chores.

Back at the battle, Bayleef doesn’t appear to be making headway. It uses Vine Whip to grab Machoke’s arms, starting a tug-of-war, and Ash wants Bayleef to tough it out for a face-to-face battle with Machoke. Machoke reels Bayleef in, but Bayleef turns it around and knocks out Machoke, winning Ash the Storm Badge! Since Jasmine still isn’t ready to battle yet, Ash takes up Chuck’s suggestion of a detour through the Whirl Islands. Chuck’s wife gives them a free ferry pass and our heroes are on their way! 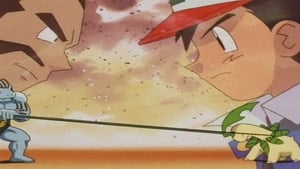