When our heroes happen upon an unusual formation in the middle of a grassy field, Brock believes it is a crop circle… placed there by aliens! Just then, something comes hurtling out of the sky towards them. A far away voice calls down an apology for almost hitting Ash with the object. Skyler, a boy training for a hot air balloon race, introduces himself to the gang and explains he was practicing for the upcoming event. Getting a marker as close to the center of the large, circular target by throwing it from the hot air balloon is one aspect of the competition. Intrigued by the hot-air balloon racing circuit, Ash quickly makes up his mind to enter as well. When Brock reminds him they don’t have a chance of winning without a hot air balloon, Skyler’s father says he has something to help them out. Pulling a balloon out of his shop, he begins to fill it up and to our heroes surprise, it’s a Pikachu shaped hot air balloon! When Team Rocket decides to enter the race as well, Jessie and James sabotage several of the balloons the night before the big event. With only Team Rocket, Ash and Skyler in the running, who will end up winning the grand prize? 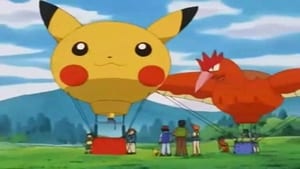