Strolling through downtown, our heroes notice a mob of girls chasing someone down. Suddenly, a man in a black cape and hat runs up to Ash and gives him a package to hold. He tells Ash to stay put because he’ll be back for the package shortly. As the mob approaches, the mysterious man runs away with the girls in hot pursuit. Our heroes stand stunned by this interesting turn of events. As they do, the package in Ash’s arms wiggles open to reveal a Smoochum! When our friends decide to try and track down Smoochum’s trainer, they pass by a theater showing the opening to a brand new Brad Van Darn movie! Realizing this is the same person who gave Ash the Poké package, the gang decides to return Smoochum to Brad during his in-person appearance at a nearby theater. Believing Brad’s Smoochum doesn’t fit the macho image of the movie star, Brad’s manager tells Ash to keep the Pokémon because Brad has no interest in Smoochum anymore. What will become of Smoochum now? 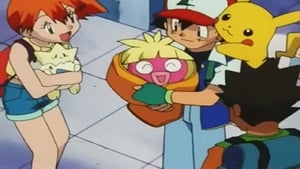