The way to Olivine City and Ash’s next Gym challenge lies across a desert of sand and rock. Just as Ash and his friends start to cross it, Team Rocket ambushes them and scoops up Pikachu. Cyndaquil is injured in the battle with Team Rocket, which ends when it uses Flamethrower on Weezing’s Smokescreen and triggers an explosion that frees Pikachu but knocks Cyndaquil into the depths of the desert. However, local tales say that sick or injured Pokémon that enter the desert will return to their Trainers in great shape, almost as if the desert contains a hidden oasis.

Cyndaquil tries to find its way back, but when it collapses with weariness, other Pokémon come carry it away. After Team Rocket crash lands in the desert, Meowth is spirited away by other Pokémon too! Both injured Pokémon are whisked off to an oasis inside a hollowed-out mountain, where a Miltank heals them both. Team Rocket follows Meowth to the mountain, but they’re turned away by a group of Exeggutor guards. Ash and his friends also find their way to the mountain, but use Brock’s Onix to burrow past the guards.

Once they get inside, the Pokémon in the oasis spring to its defense. As Meowth explains, this is no place for people—these Pokémon want to be left alone! Team Rocket drops in with their balloon and order Meowth to help steal the Pokémon, but Meowth refuses to battle. Team Rocket’s other Pokémon refuse to attack, too! Undeterred, Team Rocket grabs Miltank and overpowers Meowth, but they’re soundly beaten by Cyndaquil. Now that Miltank and the other oasis Pokémon realize Ash means no harm, he can reunite with Cyndaquil and peacefully continue on his way. 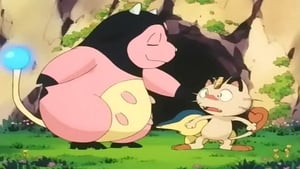