On their way to Olivine City, our heroes run into their old friend and shutterbug, Todd! As Todd and our friends catch up, a frozen Sunkern falls from the sky. The gang take it to a nearby lodge and, with the help of the old woman who runs it, thaw poor Sunkern out. The old woman explains she and her husband go to a valley with hundreds of Sunflora (the evolution of Sunkern) every year on their anniversary and have their picture taken. Tragically, this being their 50th wedding anniversary, they won’t be able to continue the tradition because all of the Sunflora have disappeared. Where have all the Sunflora gone? 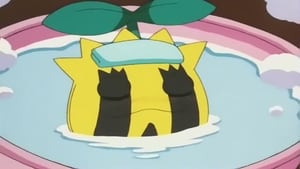