Knowing our heroes are still en-route to Olivine, Team Rocket lies in wait. Dressed as scientists, they explain they’ve just repaired the amazing Poké Pod. To test it out, Pikachu is placed in the pod and locked in tight. When Team Rocket reveals their true identity and runs, Ash and Co. are in hot pursuit. When our heroes catch up to Team Rocket, there isn’t a Poké Pod or Pikachu in site! Realizing Wobbuffet was hiding for the handoff, Ash chases after it. In Wobbuffet’s rash retreat, it trips dropping the Pikachu containing Poké Pod and falls into the rapids of a nearby river. Since the only way to release Pikachu from the Poké Pod is to possess the key around Wobbuffet’s neck, it’s an all-out race to reach Team Rocket’s blue bad-boy first. This proves problematic as Wobbuffet plummets over waterfalls, wanders through forests, gets taken for a ride on the roof of a runaway truck, blows for miles in a hot-air balloon and falls helpless to the helm of a speedboat! Who will reach Wobbuffet and the key first? 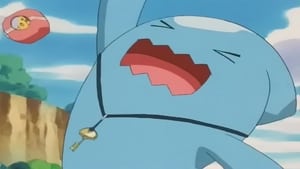