Ash and company are sailing toward Dewford Town, thanks to their new friends Mr. Briney and his Wingull, Peeko. Mr. Briney stops at a small island so that Max and May can enjoy a swim while everyone else and their Pokémon relaxes and soaks up the sun. All the while, Team Rocket is tailing the happy sea goers underwater in their Magikarp sub. Team Rocket is not the only thing following our heroes, though. A dark shadow is following the boat as it turns towards the island. When they get closer to the island, May and Max dive in the water and begin swimming and splashing around. Suddenly Ash and Brock hear May and Max scream. The boat is surrounded by a group of Sharpedo! Ash and Mr. Briney send Peeko and Taillow to help Max and May. Both Max and May were hurt by the rough skin of the Sharpedo. Pikachu uses its Thunderbolt attack to ward off the Sharpedo long enough for Mr. Briney to dock the boat on the island.

While Ash and company set up camp for the night, Team Rocket surfaces, complaining of hunger. The Sharpedo begin attacking their sub and Jessie sends Seviper after them. After one successful strike, the Sharpedo retaliate and send Team Rocket blasting away. The following morning, Ash tries to lure the group of Sharpedo away from the island, but the leader is not tricked. Brock challenges the leader using his Lotad and wins after just two attacks. Brock realizes the Sharpedo is poisoned and begins nursing it back to health, only to discover that it was Jessie’s Seviper that poisoned it. Team Rocket attempts to steal Pikachu again, but is warded off by the gang’s new found group of Sharpedo friends. The episode ends with everyone swimming happily with the group of Sharpedo, which, they discover, only have rough skin when threatened or are around enemies. Now it’s off to Dewford to compete for a second Hoenn badge! 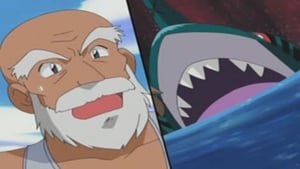 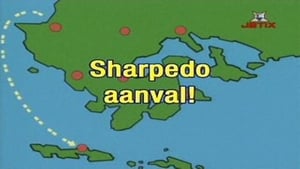