A Different Kind of Misty!

The foggy episode opens up with Team Rocket stealing a stone from a small boy near a lighthouse. Ash and his friends hear Team Rocket passing by in their balloon and Team Rocket, noticing them back, take the opportunity to try to capture Pikachu. They not only fail, but lose the stone when their balloon bursts.

After Team Rocket blasts off again, the boy from the lighthouse, joined by his sister, meet up with Ash and company. The sister calls Ash a thief and tries to start a battle with him. She makes her brother help with his Plusle and Minun combination. Team Rocket reappears and the sister finally understands who the real thieves are. Team Rocket is quickly taken care of and then the sister explains that the stone is the source of light for the lighthouse and that it is charged by Electric-type Pokémon.

Ash and the gang go back to the lighthouse to relax. When Ash puts on his vest, the siblings get very excited. They explain that Ash fits the description given in a prophecy and that he must be the one who is supposed to not only protect the stone from an attack, but also teach the stone’s protector how to fight. The boy is completely convinced that Ash is the chosen one.

Ash spends the rest of the day mentoring the boy until the fog starts rolling in and the lighthouse needs relighting. When they all reach the lighthouse to replace the stone, Team Rocket attempts to steal it and Pikachu using a Zapdos robot. They almost succeed before Ash and company catch up to them and send them blasting off again. The stone is recovered and replaced, and the boy truly believes that Ash is his mentor. 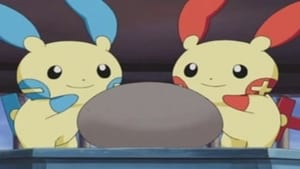