Ash and the gang have arrived at Slateport City and May is busy getting her Beautifly ready for the Pokémon Contest. Beautifly is having some trouble using its Silver Wind attack. A boy starts heckling May saying that she has a long way to go to win contests. Team Rocket is nearby and Jessie is busy training her Dustox, which is equally unprepared for the contest.

After May and Ash have a practice battle using Beautifly and Taillow, a man approaches Ash—not May—complimenting him on his battling style and introduces himself as a Pokémon Contest expert and also a berry expert. He goes into an explanation of PokéBlocks and their uses in contests. He even gives May a PokéBlock Case. He offers to show them how to make berry blocks. When they arrive at the building they discover that Torchic beat them there and ate all the Bluk berries, so they decide to go find some replacement Bluk berries.

Team Rocket, meanwhile is devising a plan to steal the berries and the Pokémon. The gang ends up only finding one Bluk berry, which is also found by the boy who was heckling May earlier. May and the heckler, whose name she finds out is Drew, start a match only to have Team Rocket try to steal the berry. Drew’s Roselia and Ash’s Pikachu stop Team Rocket’s getaway and they recover the berry. The episode ends with the entire group happily watching fireworks. 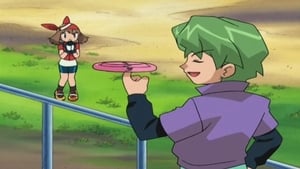