Everyone is getting up and getting ready for breakfast, but Ash is nowhere in sight. He is found outside the Pokémon Center, anxiously awaiting news on his Treecko. After breakfast, Ash and company head out to Granite Cave because they heard one of the elite Trainers is there. On their way, they pass an old man who says that this is the ultimate fishing spot where rare and unusual water Pokémon can be caught. The man then offers them some fishing poles to find out for themselves. What our heroes aren’t aware of is that the old man is actually James and the other two Team Rocket hooligans are hiding in the bushes. After some time, May catches an Octillery. She tries to battle it with her Wurmple, but fails and the Octillery jumps back into the water. Ash has the same luck with the Corphish he caught.

Throughout all this, Team Rocket is hiding in the water in their Magikarp sub, waiting for someone to snag their sub so that they can pull everyone, Poké Balls and all, into the water. May is the unlucky candidate, but instead of Team Rocket pulling her down, Ash, Max, Brock, and May pull them up and out of the water. After reciting their motto, Team Rocket jumps onto the shore and tries to steal all the Pokémon. When May defends her Wurmple, Jessie says she doesn’t want May’s Wurmple because Jessie’s is better. A fight between the girls ensues over which one is better. Max concludes that the Wurmples are about the same. James tries to steal the Pokémon again and in the resulting confusion, the Wurmples get mixed up. Later, May realizes what happened when her Wurmple won’t go back into its ball. Ash’s Taillow helps the gang find Team Rocket to make the trade. When May and Jessie move to trade back, Jessie takes both Wurmples and tries to escape in Team Rocket’s balloon. Ash sends Taillow to pop the balloon and a Pokémon battle results. The episode ends with May happily feeding her Wurmple. 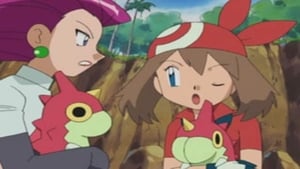 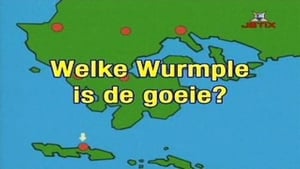