Ash arrives enthusiastically in Cyllage City, eager to battle. Upon running in the wrong direction, Serena points out that the Cyllage Gym is actually on top a mountain overlooking the city. Ash and his friends arrive inside the gym and are met with a rocky hill covered in rock walls. Ash sees Grant climbing and tells him he has come to challenge him to a match. Grant challenges Ash to climb up the rock walls to meet him at the battlefield. Ash determinedly climbs the wall, while his friends take the elevator. Grant tells Ash that he climbs walls to learn concentration and composure. As they prepare to battle, the battle judge says that Grant will use two Pokémon and that the challenger can use as many as he has on hand, with the gym leader also not able to substitute his Pokémon. Grant takes out Onix, while Ash uses Froakie. On the sidelines, Clemont and Bonnie notice Serena looks nervous and tense, weirdly enough, because Ash is the one battling. Serena denies looking that way, but tells them the reason she is nervous is because she hopes all of Ash’s recent training with his Pokémon pays off.

The battle begins, with Froakie beginning with Water Pulse and is met with Onix’s Flash Cannon. As Froakie charges, Onix uses Rock Polish to increase its own speed, but is soon surrounded by Froakie’s Double Team. When Onix uses Rock Tomb, its most powerful attack, Froakie jumps from rock from rock, a move it and Ash had practiced while training to beat Rock Tomb. Up in the air, Froakie fires a Water Pulse at Onix’s head. Onix then uses Iron Tail, but Froakie dodges and uses the opportunity to climb up Onix’s tail to its head. As Onix tries to shake it off, Froakie hangs and Onix is finally downed by Froakie’s Water Pulse.

Grant’s second Pokémon, a Tyrunt takes to the field, and is met immediately by Froakie’s Double Team. Tyrunt uses Rock Tomb, but Ash uses his special move and jumps up the rocks. Froakie uses Bubble, but Tyrunt jumps and uses Draco Meteor, knocking Froakie out. Ash, not discouraged, takes out Fletchling. He commands it to use Razor Wind, but Tyrunt eats it using Crunch. Ash uses Double Team and orders Fletchling to dive at its opponent’s chest with Steel Wing, but Tyrunt leaps into the air and hits Fletchling hard with Dragon Tail, sending Fletchling crashing to the ground, unable to battle. Ash sends Pikachu out, his last Pokémon. He uses Quick Attack, and when Tyrunt charges forward with Crunch, Pikachu jumps over his head and out of range. Grant commands Tyrunt to use Draco Meteor, and Ash responds with Iron Tail, knocking Tyrunt down. Pikachu then jumps on the falling rocks of Draco Meteor just as Froakie did for Rock Tomb. Tyrunt’s Dragon Tail is met with Pikachu’s Iron Tail and they return again to the ground. Grant decides to finish the battle with Rock Tomb, but Pikachu knocks each rock away with Iron Tail, lodging one in Tyrunt’s mouth. Hopping closer on the rocks, Pikachu uses Thunderbolt on the helpless Tyrunt, and Ash wins the battle.

Grant congratulates Ash, but Ash says that he and his Pokémon earned the victory together. Grant presents Ash with the Cliff Badge. Outside the gym, Grant asks Ash what gym he plans to visit next. Serena suggests they head to Shalour City, where she hopes to see the Tower of Mastery. Grant tells them to expect a different kind of battle at the Shalour Gym, and that he hopes he and Ash will battle at the Battle Chateau. Having decided his next destination, Ash continues on his journey. 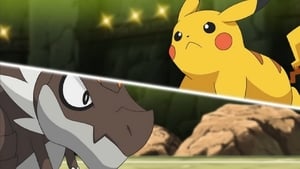