A Battle by Any Other Name!

This episode begins with Serena sharing her freshly made Poké Puffs with some of the group’s Pokémon. Even though they are not intended for him, Ash tries one himself, and loves it. As Ash hands Dedenne a Poké Puff, it is floated out of his hand and into the waiting mouth of a Slurpuff. A girl comes up behind it and promptly tells Serena that Slurpuff thinks her Poké Puffs are so decent, insulting her. She introduces herself as Miette,and gives the group’s Pokémon her own “perfect” Poké Puffs as an apology for her Slurpuff stealing theirs, and while the Pokémon are impressed, Ash is not. As Miette continues to brag and insult Serena, a heated bicker ensues, only to be broken by Clemont.

Away from the group, Bonnie finds a poster for a Poké Puff competition and suggests that Serena and Miette should compete, at which they accept. As the preliminary rounds begin, Serena, Miette, Team Rocket, and others compete in baking original Poké Puffs on an outdoor stage in front of a live audience. As the second half of the round comes to pass, the competitors are doing well, except for Team Rocket, who have only succeeded in burning their creations. When the round has finished, the world famous Poké Puff master Gena takes the stage to announce the bakers who will advance to the final round of the competition. Bonnie makes her way up onto stage to propose that Gena marry her brother, but is, as always, dragged away by an embarrassed Clemont. Miette asks Ash if he has a future bride in mind, watching for Serena’s reaction after Ash says he does not. The finalists are announced; the Berrybaker kids, Miette, and Serena are the three who will go on to the final round. After the first round, Team Rocket’s plan to win the contest and then steal all the Pokémon at venue has failed. Jessie resolves to make it so that only she can make Poké Puffs.

At a marketplace, Serena and the group attempt to find Berries to use to make Poké Puffs for the final round, but all vendors are sold out. Miette runs up to the group, and tells them that all the Berries in the town have vanished. As Serena and Miette accuse each other, Bonnie suggests that they go look for Berries in the forest. However, when the friends go to the forest, there are no Berries to be found, and Clemont confirms the occurrences to be sabotage. After Serena leaves the group to look further, Miette asks her Slurpuff to lead them, and it points the way farther into the forest. Just then, Serena screams in the distance for help, and the group runs to help.

Serena has been surrounded by angry Swirlix, who attack her. She commands Fennekin to use Scratch, but she is hit by a Swirlix’s Sticky White Thread and falls back. The friends arrive on the scene and Ash commands Pikachu to use Thunderbolt on the Swirlix, and the attacking Pokémon leave Serena, but still surround the group. Serena tells Fennekin to use Flamethrower, and the Swirlix float away. Miette’s Slurpuff, who can understand the Swirlix, indicates that the Swirlix had a reason to get angry and beckons the group to follow it. After the group breaches a cliff, the are met with the sight of many Berries. Just then, the horde of Swirlix flees out of the forest as giant claws pursue it. The trees collapse to reveal Team Rocket in a mecha, who have taken all the Berries. Meowth activates giant vacuum tubes, which suck in Pikachu, Swirlix,and the Berries. Clemont realizes the machine will lose its power if the air flow is stopped,and Ash grabs onto the tube, blocking the inlet. The vacuum power stops, and the friends target the overheated engine. Fennekin uses Flamethrower, and in response Meowth reverses the air flow, sending Ash and the trapped Pokemon out and away from the machine. The Swirlix help to attack, and Ash, Miette, and Serena combine their Pokémon’s Thunderbolt, Energy Ball, and Flamethrower to send Team Rocket blasting off again.

Back at the Poké Puff competition and after the final round, Gena announces the winner of the competition: the Berrybaker kids. After the competition, Serena and Miette resolve to keep working to be better bakers and shake hands. Ash, Clemont, and Bonnie, standing a ways away, call for Serena to come. Before she leaves, Miette warns Serena to tell Ash how she feels about him, otherwise she’ll do so herself. Serena blushes, then smiles, and runs back to her friends, who continue on their way. 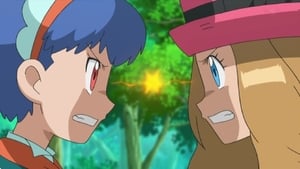