The episode begins with Ash and his friends returning from Pomace Mountain and heading out to Shalour City for Ash’s upcoming gym battle with Korrina. They witness a Sentret, Pachirisu and Patrat working together to gather berries in a tree. Ash and the others, not wanting to disturb their work, continue on with their journey. After they leave, however, Patrat and the other two Pokémon encounter an Ursaring, who is trying to take their berries from them. Ash and his friends hear their cries and decide to check on what’s going on.

Ash arrives seeing the three Pokémon hiding and commands Pikachu to attack. However, before Pikachu could intervene, a wild masked Hawlucha flies into the scene with a dramatic entrance. Ash scans Hawlucha with his Pokédex. Just as Ash remarks on how it looks different from the one shown, Hawlucha removes its mask, revealing its true face.

Hawlucha then dives in at Ursaring, slamming it to the ground. Ursaring becomes enraged, but is easily defeated in battle by Hawlucha’s Karate Chop and High Jump Kick. Ash and his friends comment on how amazing Hawlucha is. Hawlucha then jumps to the top of a nearby tree, and shows off its victory pose. A nearby man explains to the group that Hawlucha does its pose before launching into its finishing move. And much the same, Hawlucha then begins to use its final move, Flying Press. However, Ursaring dodges it at the last minute, causing Hawlucha to crash onto the ground. Ursaring then begins to approach Hawlucha, still dazed on the ground, with a large boulder. Ash blocks Ursaring’s path and commands Pikachu to break the rock with Iron Tail. The shattered boulder then hits Ursaring, causing Ursaring to collapse and run away. Ash helps Hawlucha get up, and Hawlucha leaves. Ash, excited about Hawlucha, asks the man, who reveals himself to be the caretaker of the forest, to tell him more about Hawlucha.

At the man’s home, the group share a hot drink, who now introduces himself as Keaton. Keaton tells the group that there had been many strong Fighting-type Pokémon in the forest when Hawlucha first arrived. Hawlucha had then defeated them one by one, earning its nickname “Forest Champion”. Keaton then offers to show them the site where Hawlucha trains, and Ash and friends agree.

Meanwhile, Ursaring has recruited Conkeldurr to fight against Hawlucha, and also convinces Machamp to agree to its cause.

Keaton has brought Ash and the group to Hawlucha’s training spot, and the group see Hawlucha practising its Flying Press near a waterfall. Ash introduces himself to Hawlucha and then asks Hawlucha to practice Flying Press on himself so that it can perfect the move. With a log in front, Ash helps Hawlucha perfect the move, ensuring that the move could not be dodged, without sacrificing Hawlucha’s victory pose. However, as they train, the forest bullies – Ursaring and Conkeldurr appear, along with their leader, Machamp. Keaton reveals that Machamp had been the previous “Forest Champion”, and had disappeared to train in the mountains after being defeated by Hawlucha.

Machamp then begins a fierce one-on-one battle with Hawlucha. Machamp begins by attacking Hawlucha, and Hawlucha retaliates with multiple Karate Chops. However, Machamp remains still, withstanding all of Hawlucha’s hits. Keaton reveals that Machamp must be sizing up Hawlucha’s resolve. As Hawlucha continues to attack, to both Hawlucha’s and Machamp’s surprise, Ursaring and Conkeldurr come forward to attack Hawlucha. The two bullies slam Hawlucha to the ground and continue to attack. Machamp in response attacks the two bullies and stops the fight. Machamp, now carrying the two fainted Pokémon, walks off, agreeing with Hawlucha to battle at another time.

After Machamp has left, Ash offers Hawlucha to join his team, and Hawlucha agrees. Ash then begins a battle against Hawlucha with Froakie. Froakie starts off with Water Pulse and Double Team, allowing it to avoid Hawlucha’s High Jump Kick. After attacking with Bubble, Ash commands Froakie to jump up and grab Hawlucha. However, Froakie misses, and lands into the water instead. Ash then commands Froakie to use Double Team as it jumps out of the water, followed up with Cut. Hawlucha counters with High Jump Kick, and finishes off with its newly practiced Flying Press. Froakie counters with Cut just as Hawlucha slams into Froakie, causing both to faint. 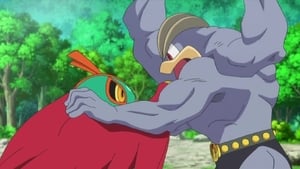