While on their way to Shalour City, Ash and his friends have encountered Team Rocket, who hold Pikachu captive. James sends out Inkay, while Ash sends out Froakie with a Water Pulse. Inkay dodges, while Clemont pulls out a machine. When Inkay uses Psybeam next, Clemont absorbs the move with his machine. James tells it to use Tackle instead, but Inkay is sent back by the machine. Ash tells Froakie to use Bubble, which sends Inkay crashing into a tree. Jessie commands Pumpkaboo to use Shadow Ball and then Dark Pulse, both of which are absorbed by Clemont’s machine. Ash and Froakie finish with another Water Pulse, sending Pumpkaboo crashing into James and dropping Pikachu’s cage and releasing him. With Pikachu back, Ash commands him to use Thunderbolt to send Team Rocket blasting off. Just as the friends thank Clemont for his help, his prototype explodes. Team Rocket lands in the forest, thinking that Clemont’s device could potentially be useful. Jessie tells the others of a secret plan.

In a park, a little boy named Myron plays with his Pancham when a stranger introduces himself as Ash from Pallet Town. “Ash” calls over “Bonnie” and “Serena”, who are actually Jessie and Meowth in disguise pretending to be the children, while James plays Ash. Inkay masquerades as Pikachu, causing Myron to question his ability to float in mid-air. James asks for a battle, to which Myron declines, but James goes ahead and tells “Pikachu” to use Psybeam on Pancham. Inkay uses Tackle, which sends Pancham into the ground. Team Rocket runs away, leaving Myron to call Officer Jenny. Team Rocket runs around town, helping themselves to food without paying. Upon reaching the city, the real Ash and his friends are confronted by Myron, who tells them he has reported them to Officer Jenny. Upon noticing that Ash’s Pikachu is not floating like the fake Pikachu, he apologizes, saying he mistook them for someone else. At a food cart where Team Rocket stole food, the same thing happens, the owner initially demanding money before noticing that Ash and his friends do indeed look different than the thieves, after the friends tell him they had just arrived in the city.

While receiving their healed Pokémon at the Pokémon Center, an announcement calls for Bonnie, Ash, and Serena to come to the front of the Pokémon Center. When they do, Officer Jenny and angry restaurant owners are waiting for them, and Ash once again tells them that they have just arrived in the city, which Officer Jenny and the owners believe. Ash, Serena, and Bonnie get called down for questioning, leaving Clemont alone. Noticing this from around a corner, Team Rocket prepares to enter the second phase of their plan. At the police station, Bonnie, Ash, and Serena are shocked to find out what they have been accused of, and call Clemont back in the Pokémon Center to tell him of the situation.

Jessie and James, disguised as scientists, enter and ask Clemont for help on a mecha, to which he accepts, leaving a note for his friends. At their laboratory, Clemont is impressed by both their tools and their newest Heliolisk mecha. Jessie and James tell Clemont that they would like him to make a defense system against Electric Pokémon, and he agrees, beginning right away. While he works, Team Rocket receives a call from Giovanni, who is satisfied with their progress in the Kalos region. Clemont has finished the mecha when he notices another faulty device, meant to transport Pokémon, and fixes it for Team Rocket. Clemont comes back to the Pokémon Center, where his friends tell him that fakes disguised as themselves have been running around causing mayhem, and vow to catch the troublemakers. In a field, Team Rocket finishes burying something, excited for the next day’s events.

The next day, Team Rocket again eats and runs without paying, knowing that soon Ash and his friends will come to find them. At the shop-keeper’s directions, the children find and confront their lookalikes in the field, who reveal themselves to be Team Rocket. Team Rocket releases the Heliolisk mecha that Clemont helped build, determined to get Pikachu. James commands the mecha to get Pikachu, who dodges its claws, but whose Thunderbolt and Electro Ball have no effect. Pikachu is hit by the mecha’s power, and is punted by its claws into Jessie’s waiting capsule. Jessie puts the capsule into Clemont’s Pokémon Transportation machine, and Pikachu is transported underground. Meanwhile, the mecha malfunctions, and, being Clemont’s invention, explodes, sending a successful Team Rocket blasting off.

Ash desperately tries to go after Pikachu, but Clemont says he will take care of it. He uses Serena’s guidebook to determine radius in which the other end of the Tranportation machine is located. He releases Bunnelby, and commands him to dig underground to find where the transportation device leads. Bunnelby leads them to Team Rocket, who send out Inkay and Pumpkaboo to get rid of the friends. Clemont takes out a new move absorption machine. The machine absorbs Inkay’s Psybeam and Pumpkaboo’s Dark Pulse and Shadow Ball. Clemont commands Bunnelby to use Double Slap on Inkay and Mud Shot on Pumpkaboo, which also hits Jessie, causing Pikachu to fly out of her hands. Reunited with Ash, Pikachu uses Electro Ball to send Team Rocket blasting off again. Ash thanks Clemont for saving them. Clemont says it was his fault for building the machine in the first place, but the others tell him he shouldn’t blame himself because Team Rocket ruined everything. As if on cue, the move absorption machine crackles with electricity and, as always, explodes. With Pikachu back safe and sound, Ash and his friends continue their journey. 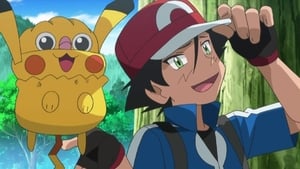