The Cave of Mirrors!

As Ash and his friends make their way to Shalour City, Serena and Bonnie rush off to a cave, but when Clemont asks what is so special about the cave, Serena says that they will have to wait until they get inside to find out. Once everyone is inside the cave, they all see giant stones, and Serena tells them that the cave is called Reflection Cave, as Clemont, Bonnie and Serena admire the reflective, mirror-like rocks, Ash rushes off when he discovers there is more of the cave to explore. Not wanting to get left behind, everyone chases after Ash. While Ash wonders around the cave, he sees a bright light coming from behind him coming from one of the rocks, but just as he approaches the rock, the light disappears and he stares at it confused.

When Ash’s friends catch up with him, they run down the cave, only to come to a dead end, so they suggest looking for another way, but Ash races off again to look, as everyone follows to try to catch him up. Separated from Ash again, Serena shouts for Ash, who has come to another dead-end, so he decides he should head back, but notices he is lost as well. As Ash approaches another mirror-like rock, this one starts to shine and open like the one from earlier, but this time Ash sees himself reach out and grab Pikachu, causing Ash to shout out, alerting his friends as they rush in his direction, but only see him as he disappears through the opening in the mirror before it closes.

The scene then cuts to show a light at the end of the cave, but as Ash exits the cave, he is in a forest that looks much different than ones he has seen before. Running down the path looking for Pikachu, Ash is stopped by Serena, who is different than the Serena he knows. Bonnie shows up, informing Clemont, who races past them, stops, before running back. As Ash explains what has happened to Pikachu, Serena doesn’t believe him when he tells them that another him grabbed Pikachu from him, as Serena and Bonnie mock him. The three aren’t convinced by Ash’s story, but Serena does admit there is something different about him compared to the Ash she knows and Mirror Clemont tells them of a legend about Reflection Cave. As Ash tells the three of them that they are different to his friends back in his world, Serena gets annoyed telling him that she’s the only Serena before she challenges him to a battle, telling him she’ll believe him if he manages to beat her, to which he accepts. The battle begins as Mirror Serena sends out Fennekin as Ash chooses his Froakie, Fennekin starts off with Flamethrower which is countered by Froakie’s Water Pulse, Serena tells Fennekin to use Scratch, but Froakie uses Double Team to avoid it, making Mirror Serena panic, as the battle finishes with Fennekin being knocked out by Bubble. Since Ash won the battle, Serena has no choice but to believe he is telling the truth just as Mirror Ash reveals himself with Ash’s Pikachu. Clemont asks then what happened for Mirror Ash to get in this situation, to which he explains that after losing to Serena, he ran into Reflection Cave, but shortly loses sight of Pikachu, so when he saw Ash’s Pikachu, he grabbed him thinking he was his. Ash then asks what Mirror Ash’s Pikachu is like, to which he explains he is wild and aggressive as the scene cuts to Team Rocket trying to capture Mirror Ash’s Pikachu.

Pikachu uses Iron Tail to send Meowth flying into James as Jessie catches the device and captures Pikachu in it. Ash tells Mirror Ash that he can’t leave him knowing he’s in trouble and offers to help him find his Pikachu while Mirror Serena wonders how they are going to find Pikachu, to which Mirror Clemont laughs to himself. Back with Clemont, Bonnie and Serena of the other world, they wonder how they are going to get Ash back, as Clemont reveals his new invention called the “Other Dimension Converter”, which doesn’t work and ends up blowing up, but back in the Mirror World, Mirror Clemont reveals he has a magic spell prepared for the situation and draws a lightning bolt shape on the ground as he proceeds to put his staff in the middle and says that whichever direction it falls in will be the direction they need to search for Pikachu in as Mirror Bonnie compliments her brother, real world Bonnie shouts at Clemont for his failed invention as a clearly upset Serena wonders if Ash has disappeared forever.

Back with Team Rocket, Mirror Ash’s Pikachu continuously uses Thunderbolt on his cage as he tries to break free, just as James notices there are people approaching the area. Ash reveals that they have reached a dead end, to which Mirror Serena wonders where Pikachu could be as Team Rocket observe them and Pikachu as they plan to capture him as well. Mirror Ash then starts to get upset at the thought over never seeing Pikachu again, but Ash tells him not to cry and not give up if he wants to find Pikachu, but just then, Ash’s Pikachu is captured as everyone looks in shock. Ash recognises the group as Team Rocket, but the Mirror World Group don’t know who they are, claiming that they are known as “The Heroes of Justice”, which confuses Ash, as Mirror Ash notices that Team Rocket also have his Pikachu. Ash orders them to let the Pikachu go, but instead, Team Rocket send out Inkay and Pumpkaboo, Ash then tells Mirror Ash that they should battle too and both send out Hawlucha. The two Ash order their Hawlucha to use Karate Chop on Pumpkaboo and Inkay, but as Ash’s Hawlucha charges in forcefully and hits Inkay, Mirror Ash’s Hawlucha jogs slowly and worried, missing Pumpkaboo as it is tackled by it. James orders Inkay to fire Psybeam at Hawlucha, but Ash’s Hawlucha steps in the way, taking the hit but becomeing confused in the process, preparing to step on Mirror Ash’s Hawlucha before it is returned to its Poké Ball by Ash as Pumpkaboo hits Mirror Ash’s Hawlucha into Mirror Ash before being returned too. Mirror Ash then starts to cry, but Ash tells him nothing will be solved by him crying and that they haven’t lost yet, so they shouldn’t give up. Mirror Clemont then picks up the two cages containing the Pikachu, but is seen by Meowth, panicking, Clemont stands on Meowth and dodging Jessie and James’s attempts to stop him as he throws the cages into the air, which Serena has her Fennekin use Hidden Power on them, breaking them and freeing the two Pikachu before they land in front of their trainers before both Ash and Mirror Ash order their Pikachu to blast Team Rocket off with Thunderbolt.

After receiving praise from the Mirror World group, Mirror Serena tells them it will be dark soon, which makes Mirror Clemont remember about the legend of Reflection Cave and that anyone stuck in the Mirror World after sunset will be stuck there forever. As Ash and the Mirror World group arrive back at Reflection Cave, Mirror Ash explains how he opened up the portal to the other world. Ash then starts wishing hard to travel with his friends again, Clemont, Bonnie and Serena do the same until a portal opens up on both sides, allowing them to see one another between the two worlds. As they all say how much they want Ash back, the portals float closer and closer, but soon start to move apart, resulting in Ash holding Pikachu and jumping across, reaching out to his friends as he starts to fall, but Serena grabs his hand and they all pull him up. Everyone says goodbye to each other as they promise to meet again, and once the two portals close, Ash states that the group from the Mirror World are going to continue their journey together and that they should do the same.

As they exit Reflection Cave, it is starting to get dark too. Serena asks Ash if they will always be together on their journey to, as Ash tells her that he wouldn’t want it to be any other way as Bonnie and Clemont state that they are a team and always will be. They all leave to continue their journey to Shalour City. Following their strange experience in Reflection Cave, it’s off to the Pokémon Center, as our heroes’ journey continues.

This episode ends while Team Rocket are seen in the woods of the Mirror World after they were sent flying from earlier. They look up at a rock and see the Mirror Team Rocket, who are the real Heroes of Justice, leaving the real Team Rocket shocked at what they had just seen. 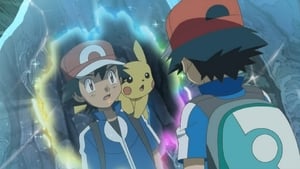