The Bonds of Evolution!

This episode begins with Ash and his friends, who have found a poster advertising a battle featuring the Pokémon Champion of the Kalos region, Diantha. The friends tell Ash, who has never heard of Diantha before, that Diantha is not only the strongest Pokémon trainer in Kalos, but is also a famous actress. Ash decides to request a battle with Diantha, and the friends run off to meet her.

Behind the scenes at the stadium, Diantha’s manager tells a large crowd that Diantha is not accepting meetings or interviews. Just as Ash and his friends are about to leave, Professor Sycamore appears and motions to them to follow him into a room. The professor has come to examine the Mega Evolution that Diantha’s Gardevoir possesses. The friends are excited to also hear that Diantha is in the room next door. Ash head towards the door, wanting to request a battle immediately, but before he can open it Diantha emerges, much to the awe of Serena, Clemont, and Bonnie. Professor Sycamore asks Diantha if she has thought about his request to leave her Key Stone temporarily in his possession, to which she respectfully declines, saying that the Key Stone is the very bond between her and Gardevoir. Professor Sycamore persists, however, and Diantha begins to offer a compromise for the next time she visits Lumiose City. Diantha’s manager Kathi Lee, however, appears and abruptly tells Sycamore that Diantha’s schedule is full. Diantha tells the group to feel free to watch the battle.

At the battlefield, the two opponents take to the field to a cheering crowd, Diantha and a previous year’s champion from Brackish Town, Magnus. In the stands, Ash asks Professor Sycamore about the Key Stone. Professor Sycamore tells him the Key Stone is the stone Trainers hold, and the Mega Stone is the stone that Pokémon hold, both crucial to Mega Evolution. Diantha releases Gardevoir, who wears a Mega Stone. Professor Sycamore tells the travelers that a close bond between the Trainer and Pokemon is also crucial to Mega Evolution. Above, Team Rocket watches and decides to get Gardevoir for themselves, hoping to please Giovanni. On the field, Magnus releases Absol, and the battle begins. Magnus and Absol begin with Bite, but Gardevoir is too quick. Absol then uses Quick Attack, but again Gardevoir evades the attack, able to understand Diantha’s commands merely through eye contact. Magnus’s Absol uses Psycho Cut, but Gardevoir repels it with Shadow Ball, which rebounds to hit Absol. Absol uses Perish Song, but Gardevoir uses Moonblast to knock Absol out, winning the match.

Inside the stadium, a crowd again forms, hoping to see Diantha. An officer tells the crowd that Diantha has already left for a movie shooting. Serena suggests that the group go try Brackish Town’s famous chocolate cake, Professor Sycamore opting to join them after he takes care of his data. However, when the travelers reach the restaurant, they are greeted by a long line. However, Bonnie and Serena are determined to get through the line, and manage to procure one slice. Faced with the predicament of sharing one slice with four people, Clemont pulls out a machine that can cut the piece into exactly equal pieces. Before he can cut into the dessert, the group notices a disappointed woman who was unable to procure a slice, and offer to share with her. The lady reveals she is indeed Diantha, and the group share the dessert, after which Bonnie asks for Diantha to marry her brother. Ash determinedly asks Diantha to have a battle with him, and after his persistence, she accepts. Professor Sycamore appears, wanting to also watch the battle.

In a field, Ash begins to battle Diantha’s Gardevoir with Pikachu. Ash begins with Pikachu’s Iron Tail, followed up by Quick Attack, which Diantha’s Gardevoir nimbly avoids. Ash next commands Pikachu to use Electro Ball and Thunderbolt, which Gardevoir also dodges. Gardevoir uses Shadow Ball, which sends Pikachu flying and Ash running to catch him. Seeing Ash’s devotion to his Pokémon, Diantha recognizes his passion. Just then, Team Rocket releases a net, which captures Gardevoir in a transparent box. Diantha orders Gardevoir to use Shadow Ball on the box, but to no avail. Jessie throws a smoke bomb and Team Rocket’s balloon soars off. Diantha, who knows where Gardevoir has gone, leads the way.

The group congratulates Diantha as Mega Gardevoir returns back to normal. A helicopter with Kathi Lee arrives to pick up Diantha. Diantha thanks Ash and all the children, but has to go to her next shooting. Just before she leaves, Ash tells Diantha that he is challenging the Kalos League, and asks her to battle him when the time comes. Diantha tells him she’ll look forward to it, and the friends and Professor Sycamore wave as the helicopter rides off into the sunset, having all learned more about the secrets of Mega Evolution. 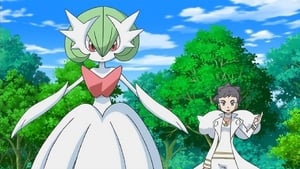