The Clumsy Crier Quiets the Chaos!

The heroes enter a Pokémon Center. Wigglytuff comes, but trips over and scatters the Poké Balls it was holding. The heroes help it collect the Balls back, though Wigglytuff falls down once more. Nurse Joy comes and helps Wigglytuff, telling the heroes it is new to the Center. A van comes, so the heroes and Nurse Joy head outside to see a wounded Linoone and Bidoof. Wigglytuff goes to help, but falls down. Serena and Bonnie get Linoone into the Center. Clemont dramatically takes out his Aipom Arm to get Bidoof, but Ash has beaten him to it, already carrying Bidoof into the Center. However, a new van appears, so Joy and Clemont go to help more Pokémon. They bring in Meowth and Pumpkaboo, while Jessie and James, dressed as paramedics, see that the twerps are here as well. Clemont goes inside, but Wigglytuff bumps into him.

Meowth flies into the air, so Wigglytuff goes to help him. However, Wigglytuff’s head bumps into Meowth, and Meowth is knocked onto the wall, displeasing Jessie and James. Nurse Joy apologizes, though hears another van and brings a Teddiursa inside as well. A while later, Joy has healed the Pokémon. Wigglytuff carries Teddiursa, but trips over, causing Teddiursa to be blown away. Its Trainer catches it, making Teddiursa happy, though Wigglytuff is visibly upset. They ask the Trainer, a Pokémon Breeder, about what happened. The Breeder reports that a Salamence came and began attacking everyone. She noticed that it seemed to be in pain, so Joy promises to heal Salamence’s injury. At night, Pikachu visits Wigglytuff, trying to cheer it up, but Wigglytuff remains sad. Team Rocket observes and plan on catching both Pokémon.

However, Ash appears, advising Wigglytuff to visit Nurse Joy, who is worried, lifting its spirits. Later, the heroes are worried about Wiggytuff, as it is convinced it is a failure. Nurse Joy comes and assures them they shouldn’t be worried about that. Bonnie takes a book about Wigglytuff and reads it. Nurse Joy recites there were Flygon that caused rampage in the area. A Wigglytuff appeared and calmed them down by itself, and then healed the injured Pokémon, restoring peace in the area. Since then, all Pokémon Centers in Kalos have had a Wigglytuff as their assistant. Joy and the heroes believe Wigglytuff will grow as a helpful assistant, ready to heal anyone. Wigglytuff cries after hearing these compliments, and rushes to Nurse Joy, but falls down.

The next day, Clemont presents the Mechanized Motivator. He places it on Bonnie’s head and the machine tries to motivate her. However, Bonnie is not impressed. Clemont then places it on Wigglytuff’s head. The machine overloads, so Pikachu stops the machine, but it explodes anyways. Jessie and James come, dressed as paramedics, and take Pikachu and Wigglytuff, as they claim they are injured by the explosion. They take the Pokémon into the van and reveal themselves. Pikachu uses Thunderbolt, but it fails, as the van is Electric-proof. Team Rocket drives off, while Joy tells the group that they have an ambulance van they can use.

As Team Rocket is driving off, happy to have captured Pikachu and Wigglytuff, Meowth stops as something is blocking the road. They tell it to move, but it turns out to be a Salamence, the very same one they tried to control earlier. Meowth drives backwards, as the Salamence attacks in pursuit. The van is blown in the air, though Pikachu and Wigglytuff come out, joining the heroes and Nurse Joy. Team Rocket ask the twerps to help them, as the Salamence they tried to capture is now berserk. The heroes are unimpressed by Team Rocket’s method of capture. Salamence attacks, but misses. Joy tells Salamence she can heal the pain, but Salamence uses Flamethrower against her. However, Wigglytuff uses Protect, defending Joy and itself. Ash drags Joy away, as Salamence attacks Wigglytuff. However, Wigglytuff walks to it, unharmed, and Clemont points out that Wigglytuff is a Fairy-type Pokémon, so Dragon-type attacks have no effect on it.

Wigglytuff uses Heal Pulse, healing and calming Salamence down. Ash comes and takes the device from Salamence’s head. The heroes and Joy are pleased at how Wigglytuff was successful. Team Rocket is relieved, but gets blasted off by Salamence. Later, Joy thanks the heroes, though Ash points out that Wigglytuff should be given the credit, instead. Joy asks Wigglytuff to be her assistant, touching Wigglytuff. Pikachu comes to Wigglytuff, comforting it. The heroes bid farewell to Joy and Wigglytuff, who decides to become Joy’s assistant. 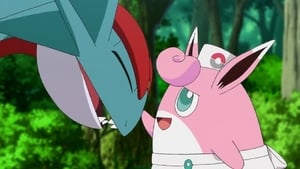