Ash and his friends are walking along a forest road when a girl on roller skates appears in front of them. The trainer, who introduces herself as Korrina and her partner, Lucario, challenge Ash to a battle to claim their ninety-ninth successive victory. At a different location, Ash and Korrina prepare to battle. Ash and Pikachu begin with a Quick Attack, which Lucario counters. Pikachu’s next series of Iron Tails are also blocked and evaded. Lucario uses Swords Dance to raise its attack power, before delivering a Bone Rush, knocking Pikachu back. Korrina commands Lucario to repeatedly use the effective Bone Rush on Pikachu, sending the weakened Pokémon flying. Lucario then finishes the job with a Power-Up Punch. After the battle, Korrina offers Ash a Sitrus Berry for Pikachu and reveals that she is the Gym Leader of the Shalour City Gym. The group decides to have lunch together.

While they are eating, Bonnie notices a stone on Korrina’s glove similar to Diantha’s, which Korrina confirms is indeed a Key Stone. However, Korrina cannot Mega Evolve her Lucario because it does not possess a Mega Stone. She informs the group that since her ancestors were the first to Mega Evolve a Lucario, it is custom for a Shalour City Gym Leader to have a Pokémon able to Mega Evolve as their partner. Korrina remembers her grandfather giving her the Key Stone and telling her that apart from the two stones, the bond between Trainer and Pokémon is also essential to Mega Evolution. In order find the Mega Stone, Korrina is headed to Geosenge Town, while on the way she hopes to battle her way to one hundred successive victories, Ash being her ninety-ninth opponent. Korrina shows the group a scrapbook where she keeps the prints of all the Pokémon she has battled, and subsequently makes sure Pikachu has his prints commemorated, albeit with ketchup. From the bushes, Team Rocket watches and plot to steal Lucario and the Key Stone, as well as Pikachu; whom they plan to both Mega Evolve using the Mega Stone from Geosenge Town.

As Korrina ponders her one hundredth battle, a truck pulls up. The side opens revealing Jessie, James, and Meowth dressed as fortune tellers, claiming to be Mega Evolution appraisers, who claim to be able to predict the moves and strength a mega-evolved Pokémon will have. Korrina passes on their offer, but the “appraisers” insist, and usher Lucario onto the stage, as well as borrowing Korrina’s Key Stone glove and Pikachu, but pass on Dedenne. Korrina asks the appraisers whether they really know what’s in Geosenge Town, as the Mega Stone needed to evolve differs depending on the Pokémon; the Mega Stone in question being able to only Mega-Evolve Lucario. As the kids begin to question, Team Rocket abandons their act and cage Lucario and Pikachu, releasing a smoke bomb and departing in their balloon.

Clemont prepares to unveil an invention for the situation, but all of the group has already started running. In their balloon, Team Rocket argues over whether a Mega Stone to evolve Pikachu actually exists while Pikachu and Lucario struggle to break the cage’s walls. Meanwhile, when Ash, Korrina, and the group wonder if they’re going in the right direction, Korrina closes her eyes and senses that Lucario is indeed nearby. She recalls memories of growing up with Lucario, and Clemont remembers Diantha also being able to sense where her partner, Gardevoir was. Ash, having a similar relationship with Pikachu, agrees.

Back in the air, Pikachu and Lucario struggle to escape their confinement. A thought occurs to Lucario to power up using Swords Dance, and together with Pikachu’s Electro Ball uses Power-Up Punch to puncture the hot air balloon. As they cage breaks open on the cliffs below, Lucario grabs the Key Stone. Korrina, sensing it’s location, continues to lead the other trainers. Now free, Lucario and Pikachu are attacked by a Shadow Ball from an advancing Team Rocket, trying to prevent their escape. Pikachu attempts to use Electro Ball, while James and Jessie counter with Inkay and Pumpkaboo’s Psybeam and Dark Pulse, which hit their respective targets. Just when it looks like Team Rocket is close to victory, Ash and the gang run into the scene, led by Korrina. They decide to settle it with a tag battle.

Jessie and James begin with their Pokémon using Shadow Ball and Psybeam, while Korrina’s Lucario deflects both attacks easily with Bone Rush. Not giving up, James commands Inkay to use Tackle on Lucario, but Lucario sends it flying with Power-Up Punch and Bone Rush. Angrily, Jessie attempts to use Shadow Ball, but Ash commands Pikachu to use a Thunderbolt. Team Rocket is sent blasting off again, securing Korrina and Lucario’s one hundredth victory; their only regret not being able to get a print for their collection.

Later, when Korrina and Lucario prepare to depart in pursuit of the Mega Stone, Ash asks if he and his friends can go along, wanting to witness Mega Evolution for themselves. Korrina and Lucario agree, and the group runs off towards Geosenge Town, much to Clemont’s dismay. 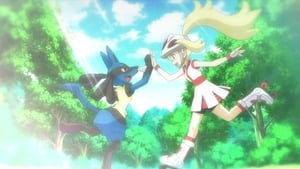