Battling into the Hall of Fame!

On day six of the Pokémon Summer Camp, the final event, the Team Battle competition, has started. Professor Sycamore begins by explaining the tournament, and mentions that the top two teams – Team Froakie (Ash and his friends) and Team Squirtle (Tierno, Shauna and Trevor) – are at equal points. Back at the lodge, Clemont, Trevor, Shauna and Tierno explain to Ash, Serena and Bonnie that a Team Battle involves battling as a team using various types of formations.

The competition starts with Ash, Serena and Clemont facing a team consisting of Furfrou, Manectric and Fletchling. Pikachu begins with Electro Ball, which Fennekin combines with Hidden Power to form a battle combo move. Clemont commands Bunnelby to use Dig. Electro Ball and Hidden Power knock out the opposing Manectric and Fletchling, while Dig knocks out Furfrou. Professor Sycamore then announces that Ash and the group have advanced to the final, facing Team Squirtle for the last battle. Before the final, both teams are given time for a strategy meeting.

Meanwhile, Team Rocket, still disguised as chefs, are spying on the group. They plan to steal Team Squirtle’s Squirtle, Charmander, and Bulbasaur so that they will be able to lure in Pikachu who will be bound to come and rescue them. But using the stolen Pokémon as a shield, they plan to catch Pikachu who will be unable to attack Team Rocket. They are then summoned by Madame Catherine who asks them to cook food, but as she leaves, they reveal that they will no longer be acting as chefs at the Summer Camp. Team Rocket then approach Tierno’s group. As ‘kudos’, Team Rocket offer their Pokémon a health check-up, lying that Nurse Joy is busy with Pikachu and the others. The three hand over their Squirtle, Charmander, and Bulbsaur into a cart. Team Rocket then run off into the woods, and Jessie commands Pumpkaboo to use Leech Seed, trapping Squirtle, Charmander and Bulbasaur inside the cart.

At Ash’s advice, the groups decide to split up to look for them. But just as they leave the Pokémon Center, Bunnelby and Fennekin already begin to sense where Team Rocket are, and then run off in one direction. Soon, the two groups find Team Rocket with Madame Catherine, who is asking Team Rocket where they had been. At Fennekin’s insistence, Pikachu pulls off the cloth covering Team Rocket’s cart, revealing Squirtle, Charmander and Bulbasaur trapped inside. Team Rocket then reveal their true identities, and call out Pumpkaboo and Inkay. They threaten to Ash and his friends that if they attack, Squirtle, Charmander, and Bulbasaur will be harmed, and then instead offers Pikachu to join Team Rocket.

But then out of the ground, Bunnelby hits Team Rocket with a surprise Dig. With this opening, Froakie and Fennekin run toward Team Rocket. Froakie uses its frubbles on Pumpkaboo and Inkay, while Fennekin uses Scratch, freeing the three trapped Pokémon. Froakie then uses Cut on the whole cart to break the cart in half. Pikachu finishes off with Thunderbolt, causing Team Rocket to blast off.

In the afternoon, the final battle commences with Team Froakie’s Pikachu, Chespin, and Fennekin, against Team Squirtle’s Squirtle, Charmander, and Bulbasaur. Pikachu begins with Quick Attack, and Trevor’s Charmander attempts to stop it with Flamethrower. However, this is blocked by Fennekin’s own Flamethrower, protecting Pikachu. Pikachu then attacks Squirtle, but Squirtle’s Rapid Spin deflects and throws Pikachu away. Squirtle then hits Fennekin with Water Gun. Chespin retaliates Vine Whip on Squirtle, which is deflected again by Squirtle’s spin. Trevor then commands Charmander to use Flame Burst on Chespin, with its embers also hitting Pikachu next to Chespin. Bulbasaur uses Razor Leaf, hitting all three Pokémon.

Bulbasaur then proceeds with charging up Solar Beam, and Tierno and Trevor plan to buy Bulbasaur some time. Tierno commands Squirtle to use Aqua Tail, which overpowers Fennekin’s Hidden Power, causing Fennekin to faint. Charmander uses Flamethrower, which Pikachu dodges, but then Bulbasaur fires off its now-ready Solar Beam at Pikachu. Clemont commands Chespin to use Vine Whip, which picks up Pikachu, narrowly avoiding the Solar Beam. Pikachu then hits Charmander with Thunderbolt, causing it to faint.

Chespin’s Vine Whip then blocks Squirtle’s Rapid Spin, while Pikachu fires off a surprise Electro Ball, making Bulbasaur unable to battle. Squirtle then uses Aqua Tail which Pikachu dodges. Pikachu retaliates with Thunderbolt, causing Squirtle to faint. Team Froakie are then announced to be the winners, allowing their names to be put into the Hall of Fame.

On the final night, fireworks light up the sky, celebrating the week at the Summer Camp. Ash approaches Tierno and asks Tierno to show him his rhythmic battle style to prepare his battle at the Shalour Gym. Back at the lodge, Tierno teaches Ash and his Pokémon how to ‘move and groove’. Ash is surprised that he must also move and groove along with the Pokémon.

Next morning, Professor Sycamore officially announces the end of the camp. 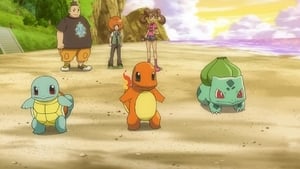