Showdown at the Shalour Gym!

After arriving at Shalour City, Ash is ready to battle Korrina and get his third Kalos Gym Badge. Froakie and the others are going to watch the battle. Gurkinn is the referee and says that this battle is 3-on-3 and only Ash is able to make substitutions.

Ash has no idea how he is going to win and while looking up towards Serena, has a flashback about the dancing practice from the other day. Following Serena’s advice, Ash decides to use his own strategy and in the middle of the fight, Mienfoo uses High Jump Kick as Hawlucha waits for the right moment to lure it in. On Ash’s orders it perfectly dodges Mienfoo’s High Jump Kick (with the latter suffering recoil damage). Hawlucha uses Karate Chop and it hits Mienfoo. Korrina tells Mienfoo to fight back with Force Palm as Ash tells Hawlucha to use Flying Press. It dodged Mienfoo’s Force Palm and scores a direct hit with Flying Press, knocking Mienfoo out.

Korrina recalls Machoke and sends out her last Pokémon, Lucario. After sending Lucario out, Korrina Mega Evolves it. Ash decides to keep Fletchinder in since it has a type advantage against Lucario. Fletchinder attacks with Flame Charge while Lucario uses Metal Sound. Fletchinder struggles a little bit, but still manages to score a hit on Lucario. Team Rocket, while watching the battle, waits for the right moment to do their evil deed. Lucario uses Aura Sphere, but Fletchinder managed to block with Steel Wing. While the smoke clears, Lucario comes up behind Fletchinder and uses Power-Up Punch, knocking Fletchinder out.

Ash recalls Fletchinder and sends Hawlucha again to battle Korrina’s Lucario. Ash tells Hawlucha to use Karate Chop. As Ash’s friends cheer for him and Hawlucha, Team Rocket is running down the hall, attempting to steal Pikachu. However, as they are about to go further, Froakie sees them and uses its Frubbles to stop them in their tracks. The friends also notice them and ask them why they’re here. Team Rocket states that they are just doing their job and tells the friends to stay out of their way. Froakie (according to Meowth) retorts that Team Rocket is actually the one in the way of the battle. The friends also tell them that they’re not going to interfere with Ash’s battle. Team Rocket, wasting no time, sends out Pumpkaboo and Inkay to battle. As the Pokémon is about to hit the friends with Shadow Ball and Psybeam, Froakie steps in and uses its Frubbles to block the attacks, much to Team Rocket’s shock. Quickly, Clemont sends out Chespin and Serena sends out Fennekin. By their Trainers’ orders, they use Pin Missile and Flamethrower to send Team Rocket blasting off.

During the battle, Ash, who is still battling and didn’t notice Team Rocket, asks his friends if something happened, but Serena replies that nothing happened. As the others cheer, Hawlucha attempts to use Flying Press but Lucario hits it hard with Bone Rush. Before Hawlucha can strike back, Lucario uses Aura Sphere which sends Hawlucha flying into the wall. After the smoke clears, it is revealed that Hawlucha is knocked out.

After recalling Hawlucha and remarking that Korrina and Lucario have gotten much stronger from training, Ash sends out Pikachu as his last Pokémon to battle Lucario. After a pause, Serena asks why neither Ash nor Korrina are making a move yet, which Clemont replies that their Pokémon can’t afford to lose the battle and that they’re being extra careful. Starting off, Ash tells Pikachu to use Quick Attack as Korrina tells Lucario to draw it in. Still running, Pikachu prepares to use Electro Ball while Lucario uses Bone Rush. Pikachu manages to strike but Lucario’s Bone Rush sends the attack flying towards the ceiling. Pikachu uses Iron Tail next, but Lucario blocks it and sends Pikachu flying. Ash, tells Pikachu to use Thunderbolt while in mid-air. Pikachu scores a direct hit on Lucario, much to Korrina’s surprise.

Lucario uses Aura Sphere and Pikachu gets hit but still manages to hang in there as he releases lightning bolts in determination. Lucario uses Metal Sound, immobilizing Pikachu. Thinking fast, Pikachu uses Thunderbolt to stop Lucario’s Metal Sound. Lucario also uses Aura Sphere, but Pikachu manages to deflects it with his Iron Tail, as Clemont states that’s the same Draco Meteor Climb Strategy from the Cyllage Gym Battle with Grant. Korrina tells Lucario to use Bone Rush as Ash tells Pikachu to use another Iron Tail to block. During the collision, they’re both hurt but standing. Lucario uses Power-Up Punch as Pikachu uses Iron Tail and both attacks clashed. Pikachu uses Electro Ball while Lucario uses Aura Sphere and the attacks also clashed. Finally, Pikachu uses a Thunderbolt that hits Lucario which it wasn’t able to dodge, knocking Lucario out and returning it to its normal Form. Ash congratulates his Pokémon on the hard work they did and Ash receives the Rumble Badge from Korrina.

Ash then questions where he shall go next and Gurkinn says to him that he should go to Coumarine City where, according to Serena, there’s a monorail. Ash and his friends set off for Coumarine City to get his fourth Gym Badge. Before leaving, Korrina bumps fists with Ash and tells him to come back soon and Ash agrees. Pikachu and Lucario also bumped fists hoping that they would meet again someday. After saying goodbye, the heroes continue their journey. 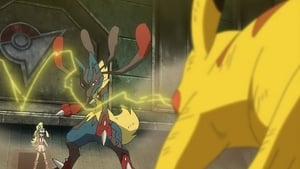