On their journey to Coumarine City, Clemont stops to show Ash, Serena, and Bonnie an old invention of his. He invites Pikachu and Dedenne to try it out. It acts like an electric shower, allowing Electric-type Pokémon to absorb the electricity they need. He calls it a “Clemontic Shower”. Suddenly, a young blue-haired woman in a lab coat runs by, who Clemont calls Miss Éclairisse. He introduces her as a teacher at the academy he studied at when he was young, and Bonnie once again futilely tries to arrange a marriage.

She then invites Ash and his friends on a tour of the academy. Mysteriously, as they walk off, a wild Luxio watches. After giving Ash and his friends the grand tour, Clemont begins to recount how Meyer enrolled him into the academy, and how he met you-know-who, who turns out to be a Shinx. Shinx was injured from lack of electricity. After being nursed at a Pokémon Center, Nurse Joy told Clemont that lots of Electric-type Pokémon are suffering from lack of electricity. With that, Clemont got the idea for his Clemontic Showers, which he invented with Shinx and became a success all over town. He told Shinx of his dream to make a world where all Pokémon can be happy, a dream Shinx seemed to support.

Back in the present day, Team Rocket overhears Clemont talking about his Clemontic Showers and how they would attract Electric-type Pokémon, including Ash’s Pikachu. They go into the sewers to manipulate the electricity. However, they are stopped in their tracks by the wild Luxio. Suddenly, there is a blackout. Ash and his friends, as well as Officer Jenny, go to investigate. They catch Team Rocket red-handed, and also notice Luxio. Clemont briefly sees the Shinx he befriended in the Luxio’s eyes as it glares at him. Luxio tries to attack, but Ash and his friends redirect him to Team Rocket. Luxio then follows Team Rocket to an electrical tower.

Meanwhile, Ash and his friends are discussing the Luxio they saw as Serena grooms her Fennekin and Pancham. Serena suspects that the Luxio they saw was indeed Clemont’s Shinx evolved. Clemont agrees, and tells the story about how he and Shinx were separated. It was the day before his graduation and he was going to deliver a cake to Shinx and ask to catch him and be his partner. But then the mayor arrives and forces him into his limo to go to a party celebrating his invention. Clemont sees Shinx soon to be disappointed as he leaves, and when he returns, Shinx leaves, assuming Clemont abandoned him.

Luxio confronts Team Rocket and Meowth says that Luxio is trying to make a world where all Pokémon can be happy. After Clemont defends Luxio, Luxio remembers his friendship with Clemont as a Shinx and licks him as a sign of affection. Then Luxio fights Team Rocket and sends them blasting off. When Clemont, Ash, and the girls are saying goodbye to Luxio, Clemont tells Luxio to meet him in the Town Square if he still wants to be his partner. Just as they are about to give up hope of Luxio forgiving Clemont, he jumps out of the bushes and allows himself to be captured, while Clemont cries tears of joy. Now they leave happily, with Clemont’s new partner in hand. 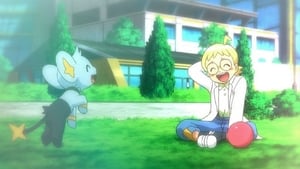