The Bonds of Mega Evolution!

Following Gurkinn’s instructions, Ash, his friends and Korrina arrive at a house on Pomace Mountain. The door is opened by Mawile, and soon Mabel arrives and introduces herself to the group. She asks Korrina and Lucario to show her their strength in a battle.

The battle starts with Korrina Mega evolving Lucario, and Mabel Mega Evolving her Mawile. Korrina commands Lucario to use Power-Up Punch, but Mawile dodges. Lucario uses Bone Rush without Korrina’s order, but Mawile dodges all its attacks. Mawile uses Iron Head on Lucario. Lucario then loses its control due to its aura. Despire Korrina’s urging, Lucario uses Power-Up Punch without any order. Mawile counters with Fairy Wind and Lucario faints.

Team Rocket are spying on the group and want to get their hands on Pikachu, Mega Mawile and Mega Lucario. They decide to wait and catch them off-guard.

Despite Korrina’s urge to train, Mabel asks the group to partner with their Pokémon and make flower arrangements. Clemont reveals his Flower Arranger One, which arranges flowers in the most artistic way possible. However, it becomes overloaded and blows up.

The next day, Ash and his friends go out in search for flowers. However, Mabel tells Korrina and Lucario to go up and see the mountain views and that they might see something wonderful.

Day after day, the group continue to make flower arrangements until Mabel can see that their hearts are one. One day, as Korrina and Lucario go out to gather flowers, Korrina spots some beautiful white flowers on top of a cliff. Lucario climbs the cliff face but then falters, almost falling. Realising that some areas of the cliff were less sturdy than others, Korrina guides Lucario to climb in certain areas to reach the flower.

That night, Korrina wonders why Mabel has not started any training and why her grandfather recommended them come to Mabel. Mabel comes to Korrina and tells them that Lucario should be able to controls its aura soon. She tells them the reason why Lucario uses moves on its own is because of how close and similar Korrina and Lucario are. However, while they may have one heart, they have two viewpoints, and asks them to bring their one heart and two viewpoints together.

At that moment, glass cracks from somewhere and Pikachu screams. As everyone comes out to search for what had happened, Team Rocket fly into view in their balloon with Mawile and Pikachu trapped. After their motto, James shoots a missile to trap Lucario, but Lucario dodges. Jessie sends out Pumpkaboo. Korrina Mega evolves Lucario and orders it to use Power-Up Punch. James sends out Inkay and commands it to use Psybeam while Jessie orders Pumpkaboo to use Shadow Ball. These moves cause Mega Lucario to lose control again. However, as Lucario is about to launch an attack, Korrina blocks it, and Lucario bites onto Korrina’s arm. Korrina asks Lucario to remember their one heart and two viewpoints. The flowers on Korrina’s arm rings, making Lucario remember Korrina and what they have done so far. After a while, Lucario comes back to its senses.

Mabel Mega evolves Mawile and commands it to use Fairy Wind. Ash commands Pikachu to use Thunderbolt. Lucario then uses Aura Sphere, a move it learnt as a result of being able to control its aura. This sends Team Rocket blasting off.

The next day, the group say goodbye to Mabel and leave Pomace Mountain. Ash decides to leave Korrina and train more before he challenges the Shalour Gym. 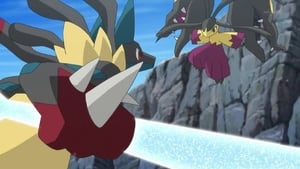