The episode begins with Ash and his friends eating lunch alongside a guest, named Blake, and his male Meowstic. Clemont notices that Bonnie hasn’t eaten her vegetables yet, and urges her to do so, saying she’ll never become a strong Trainer if she doesn’t. Bonnie points out that Clemont doesn’t like certain vegetables either, which Clemont brushes aside.

While Chespin eats his Pokémon food, he spots a female Meowstic hiding in the bushes, with whom he instantly falls in love with and chases after into the forest. Bonnie, choking down her vegetables, notices this and chases after Chespin. Once Bonnie finds Chespin, she scolds him, saying that it’s dangerous to run off into the forest. Unfortunately, Bonnie and Chespin don’t remember which direction they came in and are now lost.

Serena notices Bonnie’s absence and alerts the rest of the group. Clemont, noticing the uneaten vegetables on Bonnie’s plate, assumes Bonnie ran off in order to get out of eating them. The group notices Chespin’s absence as well, and Blake says that they should find Bonnie and Chespin soon, as there are many dangerous Pokémon living in the forest. 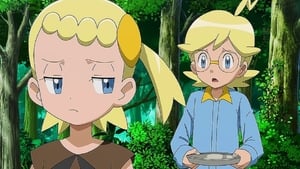