After getting the Lucarionite, Korrina is excited to have finally Mega Evolved her Lucario. Wondering how powerful Lucario now is, Clemont presents a machine to measure the Pokémon’s power. Ash challenges Korrina to a battle to which she agrees, eager to test out Lucario’s new strength. Korrina begins the match with Lucario’s Bone Rush, which flies out of its hand after blocking Pikachu’s Iron Tail. The force of the bone is so powerful that it causes an explosion as it hits the nearby mountain. Ash moves to disorient Lucario with Quick Attack, but Pikachu is stopped by Lucario’s successive Power-Up Punches. Pikachu manages to avoid it as Lucario’s eyes start to glow red as it increases in aggressiveness, and it blocks Pikachu’s escape paths. Without Korrina’s orders, Lucario punches Pikachu away. Ash orders Pikachu to use Electro Ball, but Lucario evades and punches down Pikachu and howls. Crazed, it swings Pikachu around by its tail as the trainers look on in horror. Lucario kicks Pikachu again as he struggles to get on his feet, and Korrina yells for it to stop. Ash runs to his fallen Pikachu and shields him, but Lucario still advances. Korrina tells it not to attack, but Lucario ignores her command and goes to Power-Up Punch Ash and Pikachu. Thinking quickly, Gurkinn releases his Lucario to block Korrina’s. Korrina’s Lucario collapses and returns to its non-Mega Evolved form.

The group goes to the Pokémon Center, where Ash gets back his healed Pikachu. However, Lucario remains in care, exhausted. Gurkinn tells Korrina that there are times where at first a Pokémon may get manipulated by their own powers, and Korrina apologizes to Ash and Pikachu for what happened during the battle. Korrina feels bad, but Ash reassures her that things will be fine. Gurkinn, however, is not convinced. McGinty returns with the Lucarionite fitted to an arm band, as well as a replacement picture of the trainers. The group sits down to talk, with Ash and his friends noting the difference between Korrina’s Mega Evolution and Diantha’s. The battle was the first time Lucario did not listen to Korrina and Gurkinn explains that Lucario couldn’t control its own Aura. Gurkinn says Korrina needs to learn how to control Mega Evolution, being a Gym Leader. Just then, Lucario returns, healed and back to its old self. Korrina gives it the arm band holding the Lucarionite.

Gurkinn invites Korrina outside for a Pokémon battle. Korrina is eager to prove her worth, but Gurkinn remains convinced she still does not understand Mega Evoution. Before beginning to battle, both trainers Mega Evolve their Lucarios. Korrina begins with Power-Up Punch, which Gurkinn’s Lucario blocks with its Aura. Gurkinn follows up with Bone Rush, and Korrina mimics the attack, the two Lucario engaging in close combat. Though Korrina gains an early lead, her Lucario is unable to deflect Gurkinn’s Lucario’s Aura Sphere. When Korrina’s Lucario gets back to its feet, it once again has its dangerous look. Korrina attempts to get Lucario to power up using Swords Dance, but Lucario neglects to obey instead and heads for a Power-Up Punch, which Gurkinn’s Lucario dodges with its superior Aura. Lucario continues to disobey Korrina’s orders and is knocked out by another Aura Sphere.

The battle over, Korrina’s Lucario returns to normal. Korrina is frustrated over not being able to use Mega Evolution properly. Gurkinn tells her that the problem is due to Lucario’s overconfidence and Korrina’s inability to understand her Pokémon. Gurkinn tells her she has a ways to go before really becoming the Gym Leader of Shalour City. Gurkinn orders her to train anew. He tells her to go to Pomace Mountain, where a trainer that can Mega Evolve resides. Ash and his friends offer to accompany Korrina to the mountain, reassuring her that she’ll soon learn to master Mega Evolution. 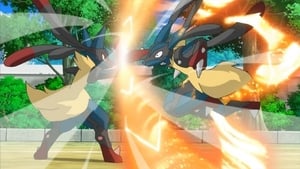