After meeting a girl whose father is more concerned about training his fighting Pokémon Hitmonchan at the gym instead of his daughter, Ash enters a Fighting Pokémon-only tournament with his Primeape. Team Rocket also enters and resorts to cheating, stealing another man’s Hitmonlee, in order to win. After learning how much his daughter means to him and winning, the man promises to train Primeape to make him stronger, so Ash gives it away and promises to return. 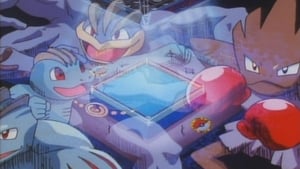