The Battle of the Badge

Ash goes to the Gym in Viridian City, but Gary gets in there before him and challenges the Gym Leader for his own satisfaction, as he has already won ten Gym Badges. The Gym Leader, Team Rocket’s commander Giovanni, agrees to the fight, eventually using a never before seen Pokémon (Mewtwo), which the Pokédex cannot identify, to easily defeat Gary. Team Rocket kidnaps and tries to give Togepi to Giovanni, but Giovanni thinks it is useless. Giovanni leaves the Gym and puts Jessie, James, and Meowth in charge. Ash challenges them and after losing three of Giovanni’s Pokémon, Jessie and James use their own. Togepi sends them blasting off with a Metronome attack, without Ash and his friends even realizing it, and Ash wins the Earth Badge, his eighth and final badge. 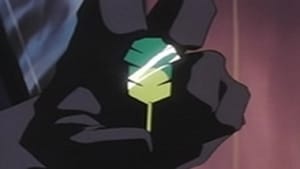