While traveling, Ash notes it has been a long time since his last Badge, so Todd suggests he takes the Pokémon League exam. Passing the exam would get him an immediate entry into the competition. But Ash being over confident of himself of passing the exam he totally fails in the first and second tests. In the third test, Team Rocket interferes the match and uses their given Pokémon to take revenge on the examinator for giving them a hard time on the first and second tests. In the end the examinator commands their given Pokémon to attack Team Rocket instead of himself, which sends them blasting off again. 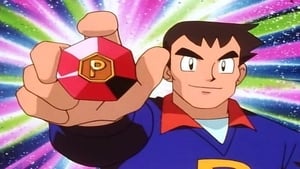