Battle Aboard the St. Anne

Ash wins a ticket to take a trip on a luxury cruise ship, the St. Anne. Ash enjoys the journey, even trading Butterfree for a Raticate, but feels guilty afterwards and asks for Butterfree back. However, the whole cruise is a scheme devised by Team Rocket, who plans to steal the Pokémon of all the trainers on board. During the confusion, James purchases a Magikarp from a devious salesman, under the impression it will make him rich, unaware of Magikarp’s true nature. After Team Rocket’s plans fail, the St. Anne is hit by a powerful storm. Ash loses his Butterfree’s PokéBall in the confusion and goes to get it, just as James tries to retrieve Magikarp’s PokéBall, and both groups are knocked unconscious while the rest of the passengers escape safely. 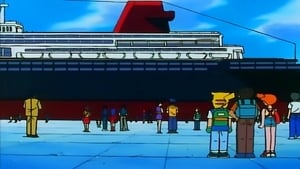