Island of the Giant Pokémon

Everyone finds themselves stranded on a strange island, with the humans and Pokémon separated. Both discover that the island appears to be inhabited by gigantic Pokémon. After being hit by a Dragon Rage attack from James’ newly evolved Gyarados while at sea, the humans are separated from their Pokémon on an island containing many giant Pokémon. Pikachu, Bulbasaur, Charmander, Squirtle, Meowth, Ekans, and Koffing try to make their way back to their trainers, while they escape the giant Pokémon, unaware that they have all landed on an island owned by Team Rocket to house a theme park dedicated to a giant robotic Pokémon. 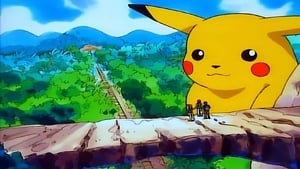