While traveling through the woods, the group encounters an Eevee that was apparently abandoned near a tree. They take it to its address in Stone Town and find it belongs to a little boy named Mikey. His three brothers are pressuring him into evolving his Eevee into one of three forms — Jolteon, Vaporeon, or Flareon — at an Evolution Party, where everyone uses Evolution Stones to evolve their Pokémon. However, the Evolution Party is disrupted by Team Rocket, and Mikey manages to use Eevee on its own to show his brothers that he does not need to evolve his beloved Eevee. 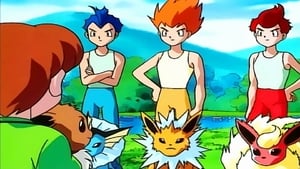