The group come into a forest where it is quiet and peaceful. They notice a large group of Pikachu that Ash’s Pikachu tries to make friends with. After saving a young Pikachu from drowning and rescuing the herd from Team Rocket, Ash’s Pikachu is welcomed among the other Pikachu as one of their own. Saddened by this sudden distance, Ash tries to leave Pikachu behind (to Misty and Brock’s shock and dismay), thinking that in the long run, it is going to be better off with its own kind. As they attempt to leave the forest with Ash still standing his ground on leaving Pikachu, the three friends are surprised when Pikachu returns to them, flanked by the other wild Pikachu including the younger Pikachu it risked its life to save earlier. The episode ends with Ash and Pikachu having an emotional reunion and hugging one another while the rest of the wild Pikachu cheer for the two of them as Brock and Misty look on. 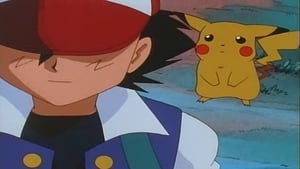