As Ash prepares for his Olivine Gym battle, he and the others come across a giant Wobbuffet. It turns out to be a Team Rocket “Wobbu Warrior” robot, used for—what else?—trying to capture Pikachu. Jasmine’s Steelix comes to the rescue, cracking the robot’s shell, freeing Pikachu, and sending Team Rocket blasting off again.

At the Gym, Janina sets out the rules of the match: a two-by-two battle. Ash begins the match by using Pikachu against Jasmine’s Magnemite. Pikachu takes an attack so it can hit the dodging Magnemite, then follows with Quick Attack to knock Magnemite out! Jasmine then sends out Steelix, which takes an early hit. It then manages to knock Pikachu out with its Iron Tail. Ash sends out Cyndaquil as his last Pokémon, trying to beat the Steel type with fire. Steelix digs itself underground and attacks, but Cyndaquil avoids it by using its Flamethrower against the wall for a quick direction change! Cyndaquil then takes a hit from Steelix’s Iron Tail, but refuses to give up. Its Flamethrower turns Steelix’s Sandstorm into a flaming whirlwind—knocking it out, and giving Ash the victory and the Mineral Badge!

After the battle, Ash and the gang decide where they will go next: Mahogany Town. To get there, they will cut through Ecruteak City. After saying goodbye to Janina and Jasmine, they’re on their way! 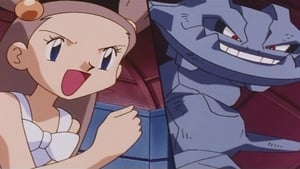