At long last Ash’s egg hatches, a Phanpy emerging to finally put everyone’s curiosity to rest. Ash and friends’ excitement is matched only by that of Jessie and James of Team Rocket, who see in the newly hatched Pokemon a chance to redeem themselves with Giovanni. Full of youthful vigor, the Phanpy quickly escapes Ash and goes off on its own, now pursued by both Team Rocket and Ash’s party. Ash and Pikachu finally set out together after this stray Pokémon and continue to be frustrated in attempt after attempt at its capture. 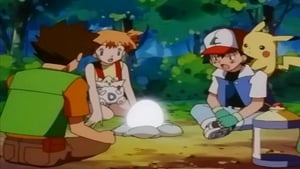