Having finally seen stability restored to the Blackthorn Gym, Ash and Clair face off in a gym battle. Ash opens with a surprise entry, his Snorlax, and defeats Clair’s Kingdra to take victory in the first round. Clair quickly comes back, wearing Snorlax down with her Gyarados. Ash sends in Pikachu, hoping its advantage as an Electric Pokémon will be enough to defeat Clair’s Water Pokémon. It isn’t until he puts Pikachu’s speed to use, however, that he emerges victorious. At two to one, Ash is only one win away from earning his final badge, but this last round—against Clair’s Dragonair—promises to be the hardest one yet. 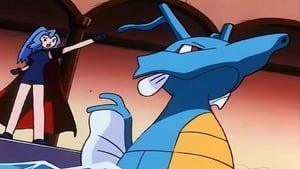