As Jessie, James, and Meowth track Ash and friends, they commiserate over past failures and discuss how they are paired unfairly against these younger trainers with such a superior array of Pokémon. They no sooner decide anew to catch as many Pokémon as possible and strengthen their own forces than a Delibird shows up. After finally capturing it, they are disappointed to learn that the Pokémon already has a trainer—a Team Rocket scout, no less, who is using the Delibird to test the abilities of promising new talent. Sensing their natural aptitudes toward crime, the scout offers Jessie and James positions within Team Rocket. These two assert that they are already members, to which the scout replies by accessing their Team Rocket personnel files and proving that they have been expelled from the organization. Shocked, Jessie and James set desperately to garnering some success that will earn them reentry into their beloved Team Rocket. 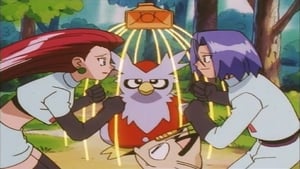