A strange energy is emitted from the sky and an Unown pops out, landing right on Misty’s head. The Unown appears to be sick and missing its friends. Misty confirms this, as for a moment when their heads knock together, Misty reads its mind! She sees a wonderland filled with Unown, and is amazed by what it looks like. Brock heard a legend that Unown can telepathically connect with human minds, leading Ash to try to reunite the Unown with its friends.

That task proves difficult, as scientists believe Unown live in an entirely different dimension! When Unown awakens, Ash reassures the Unown he will get it back home, no matter what.

The next day, Unown seems better, due to the help Larvitar gave it; Larvitar understands what it’s like to be without family and friends, so it bonds easily with the lonely Unown. Suddenly, Team Rocket step in to try and take Unown! Larvitar’s tries to use its Hidden Power to stop them, only to have Wobbuffet Counter the attack.

To keep everyone safe, Unown teleports Ash and crew to the Unown Dimension! Togepi and Pikachu appear much larger than normal, or Ash, Misty and Brock are smaller, depending on your point of view. Suddenly, the Electabuzz theme song begins, followed by a trip to Magby and Slowpoke, leading Misty to believe the Unown are creating a dimension off Ash, Misty, and Brock’s most recent adventures. When they get to a shot of Ash in color and Brock and Misty in black and white, they discover that this world is taken specifically from Larvitar’s memory! The Counter attack accidentally led the Unown to merge with Larvitar’s mind.

Ash gets sucked into a different part of the mind along with the others, who have all returned to their normal size now. Here, a voice in the background keeps repeating how scared it is, and images of the poachers who originally stole Larvitar’s egg show up. They are blown away by Larvitar’s mother Tyranitar, who was badly hurt in the process. This explains fully why Larvitar is so afraid of humans. Larvitar then appears amongst a tower of thorns, which represent the pain it went through as an egg.

Ash, Brock, and Misty try to get Larvitar out of there along with Pikachu, but the thorns turn into ice encasing it. Ash is able to break the ice, freeing Larvitar from its troubles once and for all.

They return to the real world, where Larvitar has finally learned to trust Brock and Misty. Unown is thanked by Ash for the help, just in time for the other Unown to return it to their world! 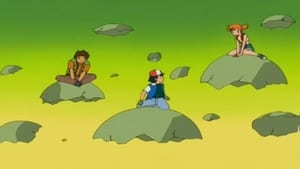