Ash begins the Silver Conference Tournament in Division H, against two opponents. The Semi-Finals round-robin style, where a victory gives you three points, a loss gives you no points, and a draw gives each challenger one point. Whoever gets the most points wins!

After his usual boast of confidence towards the match, Ash runs into one of his opponents: Macey. She is looking to know all about Ash so that she can crush him in the tournament. Just as they begin an impromptu battle, Team Rocket comes along and grabs Pikachu and Macey’s Vulpix! Macey hurts herself running after them, leading Ash to use Bayleef to get rid of them fast. Its Vine Whip throws Team Rocket aside, and frees Pikachu and Vulpix before any harm is done. Macey is more than happy with Ash for “saving her life,” and seems to be a bit smitten with him much the chagrin of Misty. She even threatens Ash with a date if she wins their match!

Professor Oak sends Ash all his Pokémon for the match, and Ash goes through Macey’s data in order to choose the perfect combination. She loves fire types, so Ash goes with Kingler. That is, until Kingler saves a group of Voltorb from falling, and winds up shocked! Kingler will be unable to battle, leaving Ash with a tough decision to make. The decision is made for him, as Officer Jenny and Squirtle arrive to help Ash out!

The match begins with Macey’s Slugma against Ash’s Totodile. Totodile’s Water Gun manages to see through Slugma’s Double Team, leading Macey to switch it out very quickly. For her next Pokémon she chooses an Electabuzz, to which Ash counters with Phanpy. When Electabuzz’s Thunderbolt proves ineffective, she switches back to Slugma, but Phanpy’s Takedown finished it off! As her third Pokémon she goes with Quilava, who surprises Phanpy with its Flame Wheel! Phanpy is no match for it, and takes Phanpy out of the picture. Macy switches out for her Electabuzz against Totodile, who gets taken out with one ThunderPunch. Only Squirtle remains, who comes close to defeat at the hands of Electabuzz’s Iron Tail. While in mid-air, Squirtle fires a Water Gun and uses Skull Bash to defeat Electabuzz. Quilava is Macey’s last hope, and it manages to get Squirtle on its back. Just as it charges in, Squirtle launches a Hydro Pump to take Quilava out for good, giving Ash his first victory!

With three points to his name, Ash prepares for his next match, while Macey “cancels” her date to train her newly evolves Magcargo, who evolved during their match! 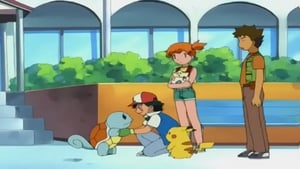