Ash and Misty each emerge victorious from arduous bouts only to be paired against one another in the next round. As these two square off, Team Rocket plots to steal the tournament’s prize using reverse psychology: they leave an anonymous tip with the local police force that the prize is in danger. This tip, Jessie reasons, will lead to heightened security, which will in turn lead to overconfidence and carelessness, effectually making it easier for Jessie and James to sneak in and claim their prize. With Ash already in strong position, Misty accidentally deploys Psyduck to face his Kingler. In a surprise turn, however, Psyduck launches a Confuse attack that wins the match for Misty. Ash takes his place in the stands and cheers for Misty as she begins her next round. Meanwhile Team Rocket watches in shock as—contrary to Jessie’s plan—not only is the police presence at the event fortified, but the police show no sign of growing overconfident. 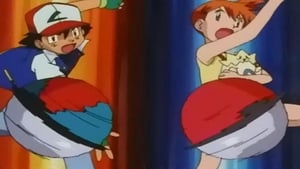