Ash and friends return to New Bark Town, but before Ash is able to register for the Johto League Championship, Professor Elm sends him on an errand to retrieve a Pokémon egg from a nearby marine Pokémon laboratory. At the laboratory, Ash and friends meet up with a young researcher who uses the supersonic waves from a Lanturn to detect the singing voices of traveling Lapras. She hands an egg over to Ash, asking that he deliver it to Professor Elm. When a school of Lapras arrive, one of them begins calling out to Ash. It turns out that this is in fact the very same Lapras that Ash parted ways with in the Orange Islands. Their reunion is cut short when Team Rocket arrives and kidnaps this Lapras along with all of its friends. Unsurprisingly, Team Rocket fails miserably, but when their Magikarp submarine is caught up in a whirlpool, it drags Ash’s Lapras’s mother and the leader of the Lapras along with it. The researcher’s equipment cannot detect the missing Lapras over the roar of the whirlpool, but magically Ash’s Lapras and its mother are able to communicate through Lapras-song, allowing Ash’s Lapras to find its missing peers. 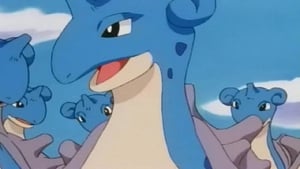